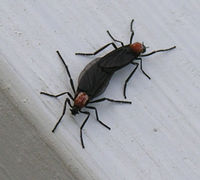 “A deadly disease called Chagas has been estimated to have infected at least 300,000 people in the United States, according to the Centers for Disease Control. This infection is transferred by the “kissing bug” and is contracted when the bug bites its sleeping victims, takes their blood, and then deposits its feces where the unaware victim rubs it into the open wound.”*

*The CSIA Foundation by Robert Anderson

I have noted the return of the Love Bugs. They have always been a bit of a mystery to me. So, tonight I went in search of the Love Bugs on Google. There are a number of postings on these little critters. Wikipedia and several of the State Universities plus the State of Florida are provided good info. The Love Bug is a member of the family known as March Flies. Else where in the world, they are known as the Honeymoon Fly, the Kissing Bug or a Double Headed Bug. I like our name for them best. The adult male is described as an flying insect. It was originally common to parts of Central America, the United States and now Florida. The insects mate and fly attached together during and after the mating period, they will be attached for several days. They were first noticed in the 1940’s around Texas and Louisiana. They reached Central and Northern Florida in the 1970’s. They settled by the 20th Century along the Gulf of Mexico, Georgia and South Carolina. In 2006, they had extended to Wilmington, North Carolina. Their flights take them as high as 300-450 meters above the ground. The larvae will feed on decaying vegetation. Adults will feed on nectar. Their flights may be formed of hundreds of thousands Love Bugs. They are seasonal, usually appearing in late spring and late summer. In Florida, they add an extra flight in December. They only do that one with us. Their flights will last for 4 to 5 weeks. I found that particularly interesting since the females only live 3 to 4 days. The males do have a slightly longer life span. They are considered pests, but they don’t bite or sting.

Love Bugs as we see them

Their bodies have a strong acidic content. They used to ruin car paint jobs pretty thoroughly. The newer cars are less likely to have this problem, just wash your car as soon as you can after an encounter with them. More damaging is the way they will clog up the grill on your car radiators cutting off the air, this may create over heated engines. They tend to get tangled up on windshield wipers, do not run the wipers to remove them. This will only smear their bodies all over your glass and create a worse mess to clean up. They do seem to be attracted to light colored surfaces. They seem to gravitate to white stripes on the road, sunlight on car surfaces, gas fumes and asphalt. I personally have found they like to land in hair, there are always a few to comb out after an encounter. Be prepared for interesting questions from small children the first time they see them. It is not unusual to see heaps of them stacked up in piles on the road after they kamikaze on the cars. Consider them a low level nuisance, they never stay long and create a lot of conversation. Probably an easier visitor to deal with than some of our relatives. Another quirk that makes Venice a fun place to live. Enjoy Venice.