Every other fabric item in the trash bag, right down to the lanyard I detached from my keychain, my messenger bag, and the duffel bag I originally packed my clothes in, goes right into the washer too.

Because last week, one of my weekend housemates stomped down the stairs just as I was putting my host’s sheets in the wash. His eyes were wide with an unusual stress I couldn’t place. One floor down, someone had spotted bedbugs.

We congregated in another bedroom with all the gravity of a war council.

I wanted to climb the walls. It was my second bedbug scare in the past month.

“No more heavy breaths, Alaina,” a council member chided me, before I realized I was issuing gale-force sighs of misery.

Recently, photos taken on a SEPTA bus that seem to show bedbugs on the seats went viral. A report on the story describes the horrified discoverer informing other riders, at which point “Everybody got off the bus and they ran.” (SEPTA has since pulled and cleaned buses from the route in question.)

Forget shouting “fire” in a crowded theater — just shout “bedbugs!” and the place will be empty in a trice as everyone flies to the nearest washer/dryer. If only bedbugs were as easy to put out as a flame. 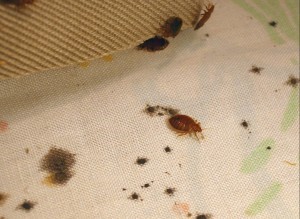 It’s happened to many of my Philly friends. I don’t see or hear much from them for a while. Then, several weeks later, when we talk again, they confide their secret ordeal. They got bedbugs.

Tolkien never wrote a more hectic battle scene and their lives were consumed until the scourge was ended. They emerge shaky and weakened.

“It’s been a living hell.” One friend, already stressed at work, recently told me a bedbug epidemic was the final straw for a Klonopin prescription.

We had a scare at our own house a couple of weeks ago, after hosting someone else who escaped while his own apartment was treated. He took every precaution before coming to us, but when we noticed tiny spots on a baseboard, we stumbled around the house rigid with fear until the pest inspector arrived.

There is nothing like the all-clear after a bedbug inspection to instantly turn your house from an ordinary refuge into absolute nirvana. But before the blessed news, one exterminator we called voiced the extent of the stigma by advising us never to even mention the scare to our neighbors, because if anyone found out that we were checking for bedbugs, the house would never sell again.

“We’d Rather See a Vampire Grinning in the Doorway”

It’s a sobering perspective on something that by all accounts is a veritable epidemic in Philadelphia. If you don’t have bedbugs right now, someone you love is having an arrhythmia because they just saw spots on the sheets. While clutter can make them harder to eradicate, getting bedbugs has nothing to do with how clean you are, where you live, or who you are. Bedbugs don’t discriminate when they hitch a ride.

On the morning I realized that I had taken a nap on a couch near the patient zero mattress before the news broke, I also noticed a small bug bite on my left knee. Before hearing about the bedbugs, I’d assumed it was a mosquito bite. After hearing about the bedbugs, I can definitely tell you that while the bug bite has not become outwardly more severe than any other bug bite I’ve suffered in my life, it now fills me with helpless revulsion, by dint of the possibility that it was inflicted by a bedbug.

It’s strange when I try to think about it logically: not only are bedbugs incredibly common in these parts; we’re no strangers to insects that suck our blood. We’ll sit out at hot, dewy parties all summer and slap some cortisone cream on our mosquito bites in the morning. We don’t flee backyards as the site of a filthy epidemic — even though mosquitoes, unlike bedbugs, can be vectors for life-threatening diseases.

Our aversion to these critters is also interesting alongside the explosion in research on the human microbiome in recent years. We now know that several pounds of our own bodies are made of bacteria, and not human cells. In fact, total up the DNA in your body, and you’ll find more bacterial DNA than human DNA, because the bacterial cells in your body far outnumber your own. And most of them aren’t making us sick — just try digesting your food or preventing certain infections without them. Who’s infesting whom here?

We can live with being outnumbered by bacteria in our own bodies, or becoming a mosquito buffet at someone’s wedding. “I have a cold,” we can say, instead of “I’m a dripping, spewing factory of invisible viruses that hijacked my own cells and are out to get yours, too,” and no-one runs for the street. We can usually handle head lice or flea treatments without losing our minds or drowning in shame. But a visible bug crawling in our sheets to bite us in the night? Let’s be real: We’d rather see a vampire grinning in the doorway.

As with many widely predictable human behaviors, there must be some evolutionary underpinning to our aversion — but perhaps our silence about it when the plague hits our own house is, somehow, an evolutionary triumph of the insects.  When we keep quiet about the problem, perpetuating ignorance about how the beasties spread (for God’s sake, don’t put your unsealed mattress out on the street), maybe that is the bedbug’s biggest victory of all.