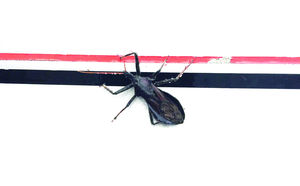 Rick Stevenson snagged this “Kissing Bug” outside his home on 55th Street in Ashland.

ASHLAND, Kentucky – Many have heard of the Love Bug, the Lady Bug and Lightning Bug, but few have seen or heard of the Kissing Bug, until now.

The Kissing Bug, also known as the Conenose Bug, have crawled their way into the area, according to the Center for Disease Control.

Reports of the bug have also been reported in neighboring states such as Ohio and West Virginia.

The Kissing Bug received  its name from the way it draws blood from its victims, usually in the face region. The bug has been around for several years but is starting to be seen in the more northern parts of the United States. Currently more than 20 states have reported the bug to the CDC.

Catlettsburg resident Rick Stevenson had a personal encounter with the Kissing Bug as he was driving in his wife’s truck on his lunch break.

“At first I just thought it was a Stink Bug,” he said.

After a few minutes of examining the bug he realized it was not a stink bug, but the Kissing Bug. Stevenson quickly captured the bug with a paper towel and placed it in a sealed container. After seeing reports from media outlets he decided to take the bug to the Ashland-Boyd County Health Department.

“I could have possibly saved the whole neighborhood from them,” he said.

While the Kissing Bug is usually a nocturnal insect many are drawn toward house lights or dark areas. The CDC shares that the bugs can usually be found under porches, in brush piles, in woodland creature nests and in outdoor doghouses or kennels.

The CDC also shared that if there is a possibility of the bug living in the house to check under the mattress and in dark spaces like bedrooms and under night stands.

If a bug is found inside a home the CDC asks residents to contain the bug and freeze it for 24 hours and then take it to their local extension agency or health department for species examination.

The CDC also wants residents to be aware that the bug can carry the Chagas disease however, the transmission of Chagas disease from a bug to a human is not easy. The parasite that causes the disease is in the bug feces.

The bug generally defecates on or near a person while it is feeding on his or her blood, generally when the person is sleeping.

Transmission occurs when fecal material gets rubbed into the bite wound or into a mucus membrane such as the eyes or mouth according to the CDC.

While the Ashland-Boyd County Health Department did not confirm that the bug Stevenson turned in was a Kissing Bug, Steve Rudd,  Environmental Health Program Manager, said he has been following the reports.

Rudd did share after receiving the bug he call the Frankfort office to ask about it.

“Currently we are not aware of any cases of Chagas Disease in the area,” he said.