Chagas Disease affects approximately 20 million worldwide, killing 50,000 each year, yet is practically unknown to most in the general public in the US.

If infected, you may not even know initially you have Chagas disease. It can slowly destroy your internal organs, and if you do not die from the acute stage, can cause death in the chronic stage, 10-20 years later.

Chagas is spreading worldwide — due to lack of knowledge and indifference.

Endemic in 21 countries, with 18-20 million infected and another 120 million people at risk

More than 100,000 Latin American immigrants living in the United States are chronically infected and a potential source of transmission of the disease by means of blood transfusions

The disease is lethal, especially for children, and debilitates patients for years.

Previously thought to be endemic in Mexico, South and Latin America, other areas of the world such as the US and Europe are considering testing all blood donations for the parasite, T. cruzi, for the parasite that causes the disease due to travel patterns and rural migrations of populations to urban areas. 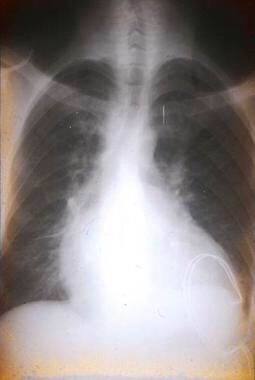 Chest radiograph of a Bolivian patient with chronic Trypanosoma cruzi infection, congestive heart failure, and rhythm disturbances. Pacemaker wires can be seen in the area of the left ventricle.

Infected triatomine bugs, that transmit T.cruzi, are found in North, Central and South America. Blood banks in selected cities of the continent vary between 3.0 and 53.0% -making the prevalence of T. cruzi infected blood higher than that of Hepatitis B, C, and HIV infection

In parts of South America, Chagas’ heart disease is the leading cause of death in men less than 45 years of age.

Blood transfusions in the US should be screened for antibodies to T.Cruzi; currently U.S. blood banks do not routinely conduct this screening.

Numerous acute and chronic cases of the disease have been reported in domestic dogs in Texas, Oklahoma, Louisiana, South Carolina and Virginia

The disease may be transmitted by the bite of an infected triaomine, (reduviid, “kissing”, or “assassin”) bugs, or through blood transfusion or transplacentally

The kissing bugs, or carriers of this disease, could be as close as your backyard.