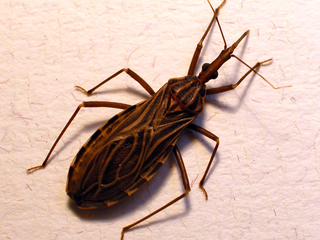 In an epidemiological study looking at previously recorded data to understand the prevalence of Chagas disease in humans, animals and kissing bugs in South Texas, researchers at the National School of Tropical Medicine at Baylor College of Medicine found higher rates of infection than expected. Their report appears today in the journal PLOS Neglected Tropical Diseases.

Chagas disease, also known as American trypanosomiasis, is a serious infection caused by a parasitic microorganism, Trypanosoma cruzi, and is transmitted by kissing bugs. Chagas disease is one of the leading causes of heart disease in Latin America. However, the prevalence of the disease in the United States, and specifically Texas, is not known.

“We took an approach where we looked at many different aspects of transmission, not just people, but also the kissing bugs and animals, to get a full picture of what’s going on in the area,” said Dr. Kristy Murray, assistant professor of pediatric tropical medicine at Baylor, director of the laboratory for vector-borne and zoonotic diseases at Texas Children’s Hospital and senior author of the paper.

In this study, Murray and colleagues wanted to determine the prevalence of the disease in South Texas in humans, animals and vectors that transmit the disease (in this case, the kissing bugs).

“There is clearly evidence of local transmission occurring,” said Murray.

Researchers suspect that transmission may have increased since these data were collected. They estimate that about 4,600 people in the Río Grande Valley have Chagas disease and that 1,300 of those are at risk of developing cardiomyopathy.

“We are now doing an investigation in a more in-depth manner,” said Dr. Melissa Nolan García, instructor of pediatrics at Baylor and first author of the paper. García also is with Texas Children’s Hospital.

“We have a grant to do surveillance and screening to get a much larger sample size of people to see if this continues to hold out,” said Murray.

This study was supported in part by MD000170 P20 funded from the National Center on Minority Health and Health Disparities, the Centers for Translational Science Award 1U54RR023417-01 from the National Center for Research Resources and the Centers for Disease Control Award RO1 DP000210-01, the United States Department of Defense, Army (W81XWH-04-2-0035), the Drugs for Neglected Diseases Initiative (DNDi), and NIH/NIAID 1R21AI114877-01A1. TPF and RP are supported by the NIH grant 5R25GM100866-02 564 awarded to Robert K. Dearth and Jason G. Parsons.