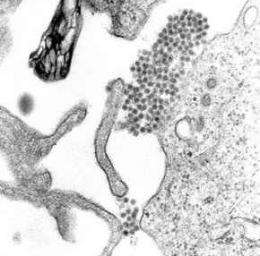 A group of researchers in Germany have discovered that flaviviruses—a family that includes Dengue, Zika and West Nile viruses—use an unexpected mechanism to hijack the cell’s machinery to replicate themselves compared to many other RNA viruses. The findings, published this week in mBio, an open-access journal of the American Society for Microbiology, highlight new ways by which viruses manipulate human cells and may reveal new targets for designing antiviral therapies.

Dengue virus and Zika virus are both positive-strand RNA flaviviruses, which means that once a virus particle infects a cell, its RNA genome can be immediately translated by cellular machinery into viral proteins to make new virus particles and spread the infection. Dengue virus can cause febrile illness, hemorrhagic fever, and even death, and infects an estimated 390 million people worldwide each year. Zika virus can also cause fevers and has been linked to severe neurological birth defects in newborns born to infected mothers.

“When we study the interactions between the host cell and the virus, we get information about both of them and about how cellular machinery is working under viral infection,” says Alessia Ruggieri, a group leader and virologist at University of Heidelberg in Germany and senior researcher on the study. “We want to understand the different strategies that viruses have evolved to escape cell defense mechanisms.”

But Ruggieri’s group had noticed in a previous study that Dengue infection of human liver cells does not elicit these stress granules at all, or does so very poorly. Now, the team investigated how Dengue virus might affect protein translation and found that the global cellular protein translation is significantly suppressed, while translation of the Dengue viral proteins proceeds.

The virus was most likely blocking the initiation of cellular translation. This step is when the ribosome machinery, which reads the RNA genetic code and converts it into an amino acid protein chain, attaches onto the start of the RNA transcript. The team determined that Dengue virus does not block the two known pathways that suppress translation initiation for cellular RNAs, but how this occurs is still a mystery.

Importantly, Zika virus also follows the same pattern of cellular behavior of repressing the cell’s translation and stress response while promoting its own protein translation. In this way, the flaviviruses clamp down on the cell’s responses to thwart infection, including deploying antiviral proteins.

“These viruses are hijacking many of the host cell translation steps or pathways to favor the production of new virus progeny,” says Ruggieri. “But how they are doing this is an open question.” Ruggieri speculates that the Dengue virus may block the stress granule formation to avoid having its genome sequestered away in these structures. Next, her team will investigate what mechanism the virus uses to direct its own translation.

Although developing therapies is beyond the scope of Ruggieri’s research, her group’s work will inform those researchers who wish to design antiviral treatments for flavivirus infections. “How the virus escapes global translation repression by switching on its own translation is a crucial step in the viral life cycle that could be a target for drug development.”