A new study has shown that dogs may be capable of becoming infected with the human norovirus — better known as the common stomach flu. The finding raises the possibility of human-to-dog transmission of the virus, and may add the norovirus to the list of known zoonotic illnesses, or diseases transmitted from animals to humans.

Dog owners and veterinarians are familiar with the idea of humans and dogs passing along a stomach virus. “There are plenty of anecdotal cases of dogs and humans in the same household, having simultaneous gastroenteritis…” Sarah Caddy, first author of the study, explained in the press release. However, until now these suspicions have not been confirmed and remained little more than folklore.

Thanks to the work of Caddy and her team of researchers, these anecdotal tales of humans and pets sharing illnesses may finally be proven true. The study has found that dogs are capable of building an immune response to the human norovirus, something which Caddy explained “strongly suggests that these dogs have been infected with the virus.” The team has also confirmed that the human norovirus can also bind to the cells in the canine gut, which, according to Caddy is “the first step required for infection of cells.” 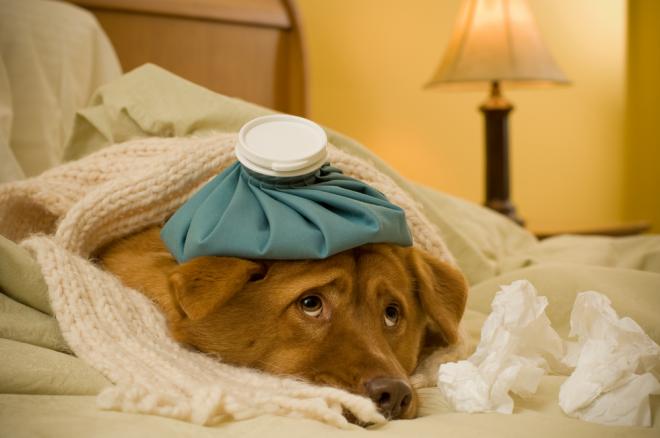 The human norovirus is the most common cause of gastroenteritis, or “the stomach flu.” It causes vomiting and diarrhea in both children and adults and is responsible for 19 to 21 million cases of gastroenteritis in the U.S. alone every year, Medical News Today reported. Although the stomach flu is usually non-life threatening, according to the Centers for Disease Control and Prevention, every year around 570 to 800 deaths are attributed to the virus, usually in young children and the elderly. Common symptoms of the norovirus are cramping, nausea, vomiting, and diarrhea. Low-grade fever, chills, headache, and muscle pains are reported in more serious cases of the virus.

Currently, humans are known to contract the norovirus by eating or drinking contaminated items, touching surfaces and objects, and then putting their fingers in their mouths, or coming in direct contact with an infected individual. However, it’s not uncommon for a disease to be spread from humans to animals and vice versa. Known as zoonotic diseases, these illnesses are able to species hop with great ease. Some of the most well-known zoonotic diseases are rabies, the plague, and West Nile virus.

Although it’s not yet confirmed whether animals and humans are capable of passing on the norovirus to one another, the evidence presented in this study is sufficient to warrant further investigation. For now, Caddy suggests that the most effective prevention against the norovirus is maintaining proper hygiene, especially when stomach flu is present in either human or animals in the household.