Nicola Stone, 20, was left covered head to toe with itchy nips that left her unable to even hold hands with partner Jerry during the couple’s break in Portugal 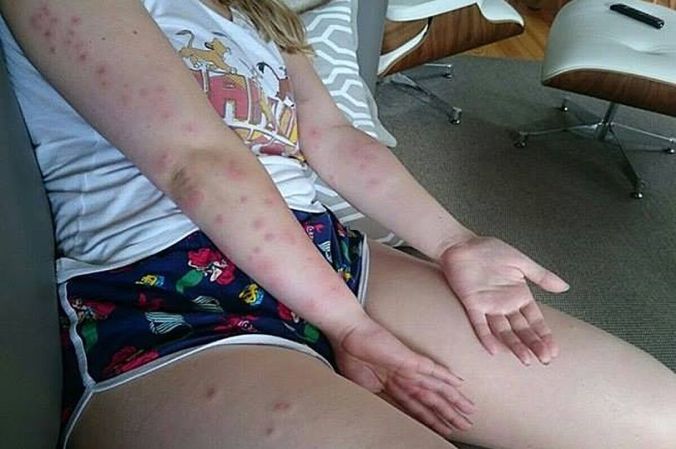 A young woman’s romantic getaway with her partner was wrecked by bloody bed sheets, and horrific bites caused by a bed bug infestation.

Nicola Stone, 20, was left covered head to toe in itchy bites that left her unable to even hold hands with other half Jerry during their trip to Lisbon, Portugal.

The couple could not sleep and Nicola, from South Queensferry, near Edinburgh, was forced to ditch her summer clothes and flip-flops and cover up for the 10-day sunshine break.

Two days in, she woke up at the Hello Lisbon Santos Apartments with a “pin-prick” rash on one arm but dismissed it, while the following morning, she awoke covered in the excruciating bites.

A pharmacist told her they were bed bug bites and she was given antihistamines and cream to stop the itch.

Nicola told the Daily Record : “It was itchy, painful and hot.

“It was only after we saw the chemist that we realised little black dots which kept appearing on the sheets was bed bug excrement.

“There was also blood on the sheets which they had dripped as they walked around the bed.

“We decided to check Tripadvisor to see if it had happened before. A guy who had been there a few weeks before us had the same problem.”

Nicola lifted the mattress in the room and found several of the bugs’ dried-out exoskeletons.

They had to wait until morning to alert the cleaner before being moved rooms.

Hotel staff also washed all their clothes to try to kill the mites. Nicola said the rest of the trip in early November was ruined.

She said: “I had to buy long-sleeved tops and I couldn’t wear flip flops because the bites were so bad so I had to wear trainers.

Back in UK, Citizens Advice told them to contact booking agent Lastminute.com and the couple eventually got a £549 refund to cover the cost of the room and Nicola’s medical supplies.

A Hello Lisbon spokesman said: “There was a problem identified in one of our properties. The property is closed until the end of the month to solve the situation without causing harm to more guests.

“Besides the refund, when the problem was reported to us, the guests were immediately accommodated in other property of Hello Lisbon.”

Lastminute.com’s spokeswoman said: “The experience and the safety of our customers is our number one priority. We regret the impact this has had on Ms Stone’s holiday.”