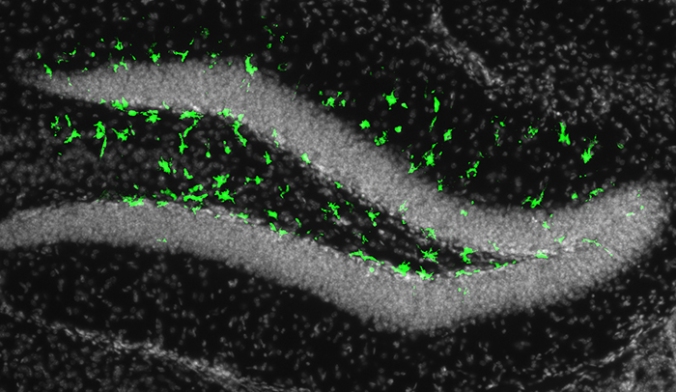 Concerns over the Zika virus have focused on pregnant women due to mounting evidence that it causes brain abnormalities in developing fetuses. However, new research in mice from scientists at The Rockefeller University and La Jolla Institute for Allergy and Immunology suggests that certain adult brain cells may be vulnerable to infection as well. Among these are populations of cells that serve to replace lost or damaged neurons throughout adulthood, and are also thought to be critical to learning and memory.

“This is the first study looking at the effect of Zika infection on the adult brain,” says Joseph Gleeson, adjunct professor at Rockefeller, head of the Laboratory of Pediatric Brain Disease, and Howard Hughes Medical Institute investigator. “Based on our findings, getting infected with Zika as an adult may not be as innocuous as people think.”

Although more research is needed to determine if this damage has long-term biological implications or the potential to affect behavior, the findings suggest the possibility that the Zika virus, which has become widespread in Central and South America over the past eight months, may be more harmful than previously believed. The new findings were published in Cell Stem Cell on August 18.

“Zika can clearly enter the brain of adults and can wreak havoc,” says Sujan Shresta, a professor at the La Jolla Institute of Allergy and Immunology. “But it’s a complex disease—it’s catastrophic for early brain development, yet the majority of adults who are infected with Zika rarely show detectable symptoms. Its effect on the adult brain may be more subtle, and now we know what to look for.”

Early in gestation, before our brains have developed into a complex organ with specialized zones, they are comprised entirely of neural progenitor cells. With the capability to replenish the brain’s neurons throughout its lifetime, these are the stem cells of the brain. In healthy individuals, neural progenitor cells eventually become fully formed neurons, and it is thought that at some point along this progression they become resistant to Zika, explaining why adults appear less susceptible to the disease.

But current evidence suggests that Zika targets neural progenitor cells, leading to loss of these cells and to reduced brain volume. This closely mirrors what is seen in microcephaly, a developmental condition linked to Zika infection in developing fetuses that results in a smaller-than-normal head and a wide variety of developmental disabilities.

The mature brain retains niches of these neural progenitor cells that appear to be especially impacted by Zika. These niches—in mice they exist primarily in two regions, the subventricular zone of the anterior forebrain and the subgranular zone of the hippocampus—are vital for learning and memory.

Gleeson and his colleagues suspected that if Zika can infect fetal neural progenitor cells, it wouldn’t be a far stretch for them to also be able to infect these cells in adults. In a mouse model engineered by Shresta and her team to mimic Zika infection in humans, fluorescent biomarkers illuminated to reveal that adult neural progenitor cells could indeed be hijacked by the virus.

“Our results are pretty dramatic—in the parts of the brain that lit up, it was like a Christmas tree,” says Gleeson. “It was very clear that the virus wasn’t affecting the whole brain evenly, like people are seeing in the fetus. In the adult, it’s only these two populations that are very specific to the stem cells that are affected by virus. These cells are special, and somehow very susceptible to the infection.”

The researchers found that infection correlated with evidence of cell death and reduced generation of new neurons in these regions. Integration of new neurons into learning and memory circuits is crucial for neuroplasticity, which allows the brain to change over time. Deficits in this process are associated with cognitive decline and neuropathological conditions, such as depression and Alzheimer’s disease.

Gleeson and colleagues recognize that healthy humans may be able to mount an effective immune response and prevent the virus from attacking. However, they suggest that some people, such as those with weakened immune systems, may be vulnerable to the virus in a way that has not yet been recognized.

“In more subtle cases, the virus could theoretically impact long-term memory or risk of depression,” says Gleeson, “but tools do not exist to test the long-term effects of Zika on adult stem cell populations.”

In addition to microcephaly, Zika has been linked to Guillain-Barré syndrome, a rare condition in which the immune system attacks parts of the nervous system, leading to muscle weakness or even paralysis. “The connection has been hard to trace since Guillain-Barré usually develops after the infection has cleared,” says Shresta. “We propose that infection of adult neural progenitor cells could be the mechanism behind this.”

There are still many unanswered questions, including exactly how translatable findings in this mouse model are to humans. Gleeson’s findings in particular raise questions such as: Does the damage inflicted on progenitor cells by the virus have lasting biological consequences, and can this in turn affect learning and memory? Or, do these cells have the capability to recover? Nonetheless, these findings raise the possibility that Zika is not simply a transient infection in adult humans, and that exposure in the adult brain could have long-term effects.

“The virus seems to be traveling quite a bit as people move around the world,” says Gleeson. “Given this study, I think the public health enterprise should consider monitoring for Zika infections in all groups, not just pregnant women.”