by Californians for Pesticide Reform
Chlorpyrifos, a neurotoxic pesticide linked to IQ loss and autism, has been found in the air in Kern County in amounts far in excess of the level of concern established by the U.S. Environmental Protection Agency (EPA) for pregnant women, according to 2016 air monitoring data released Thursday by the California Department of Pesticide Regulation (DPR). 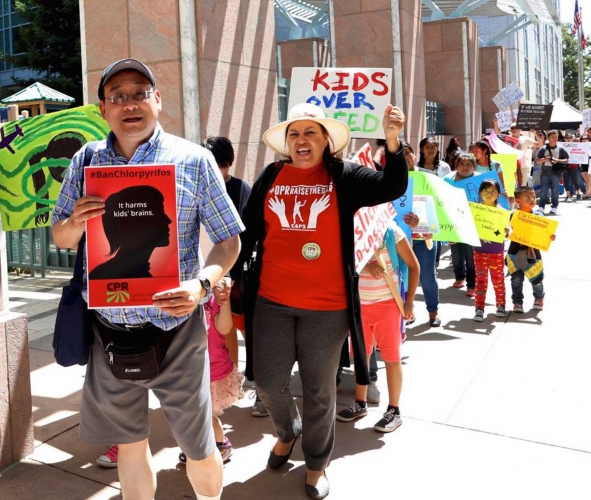 Shafter, CA – Chlorpyrifos, a neurotoxic pesticide linked to IQ loss and autism, has been found in the air in Kern County in amounts far in excess of the level of concern established by the U.S. Environmental Protection Agency (EPA) for pregnant women, according to 2016 air monitoring data released Thursday by the California Department of Pesticide Regulation (DPR).

Chlorpyrifos, which is primarily manufactured by Dow Chemical Co., was banned for home use in 2000 because of links to a wide range of neurological and developmental impacts. Slated this year for a total federal ban on all food uses, the proposed ban was reversed in March by EPA Administrator Scott Pruitt, who offered no scientific basis for his decision. California officials are now weighing a statewide ban based on the assessment by EPA scientists.

A ban can’t come soon enough for residents of California’s farming communities, who worry about the effect of chronic exposure on the wellbeing of their children. “I believe my son has ADHD because I was exposed to chlorpyrifos at a citrus packing plant when I was pregnant,” said Claudia Angulo of Orange Cove, a member of the Coalition Advocating for Pesticide Safety (CAPS) in Fresno County. “The same thing happened to my pregnant co-workers and their children. The air monitoring tells me that there are probably more children who will suffer until California bans chlorpyrifos.”

The news of high chlorpyrifos concentrations comes on the heels of two recent Kern County drift incidents involving the pesticide, that harmed dozens of farmworkers.

The chlorpyrifos air concentration for a one-month period at the air monitoring site on the campus of Shafter High School in Kern County was 39.4 nanograms per cubic meter (ng/m3) – more than 18 times higher than EPA’s level of concern for pregnant women (2.1 ng/m3).

Such figures are particularly alarming, given that the air monitor at Shafter High is some distance from fields, and chlorpyrifos use is much higher in other parts of Kern County and elsewhere in California. According to DPR data, more than 1.1 million pounds of chlorpyrifos were used statewide in 2015, with more than a quarter of that total in Kern County alone.

A growing body of scientific evidence gives residents reason to be alarmed. A 2014 study conducted by the UC Davis Mind Institute found that pregnant women who lived within a mile of fields where chlorpyrifos was sprayed more than tripled their chances of giving birth to a child with autism. Additionally, the UC Berkeley CHAMACOS team, studying organophosphate impacts on women and children in the Salinas Valley, found that every 522 pounds of combined organophosphate pesticide applications within one kilometer of a pregnant woman’s home correlates with a two point IQ loss in her children at seven years old.

The Shafter air monitor data also reveal that annual average air concentration of another Dow pesticide, 1,3-dichloropropene (product name: Telone), a carcinogenic fumigant, nearly doubled over 2015 concentrations (increasing from 800 ng/m3 to 1,560 ng/m3), and measured more than twice the previous DPR regulatory level for cancer risk (650 ng/m3). The large increase may not be surprising, given that DPR’s loosening of the cancer regulatory level last year – over the objections of the Office of Environmental Health Hazard Assessment (OEHHA) – resulted in a 50% increase in the amount growers are permitted to use.

“There has to be a better way to grow food that doesn’t increase kids’ health risks,” said Gary Rodriguez, a 4th grade teacher in Shafter. “We know that both brain-harming chlorpyrifos and cancer-causing Telone are present in the air at Shafter High at dangerous levels, even though they aren’t used heavily nearby. These pesticides need to be phased out immediately.”

A proposed new regulation aimed at protecting schoolchildren from pesticide exposure will establish quarter-mile buffer zones on school days for the most drift-prone application methods, in an effort to prevent acute exposure accidents. Public health advocates point out that the even greater problem is chronic exposure to pesticides like chlorpyrifos, which is toxic in tiny amounts. The presence of chlorpyrifos at the Shafter High School air monitoring site in at least half of the samples collected throughout the year points to the failure to contain this highly drift-prone pesticide – and the necessity of much stronger protections, including an outright ban.

Including chlorpyrifos and Telone, a total of 25 pesticides were found in the air at DPR’s monitoring stations, reflecting the reality of simultaneous exposure to multiple pesticides faced by residents of farmworker communities. California regulates pesticides individually, and cumulative impacts are not included when determining the safety of levels measured in the air. A 2016 UCLA study found that some carcinogenic pesticides commonly used in combination may interact to increase the risk of cancer by more than just their sum.

“It’s very troubling to me that the state allows schoolchildren to breathe known carcinogenic pesticides, and doesn’t even study the threat from combined pesticides,” said Valerie Gorospe, community organizer with the Delano-based Center on Race, Poverty & the Environment.

###
Californians for Pesticide Reform (CPR) is a statewide coalition of more than 190 organizations, founded in 1996 to fundamentally shift the way pesticides are used in California. CPR’s mission is to protect public health, improve environmental quality and expand a sustainable and just agriculture system by building a diverse movement across California to change statewide and local pesticide policies and practices.

PAN North America is one of five regional centers worldwide. We link local and international consumer, labor, health, environment and agriculture groups into an international citizens’ action network. Together, we challenge the global proliferation of pesticides, defend basic rights to health and environmental quality, and work to ensure the transition to a just and viable food system.