Experts at Centres for Disease Control suggest people should wear long-sleeved shirts, stop wearing shorts, stay indoors and even treat their clothes with insecticide if they want to avoid being bitten

Mosquitoes capable of spreading serious and potentially deadly diseases such as Zika, dengue and yellow fever could invade about three-quarters of mainland United States, the US Centres for Disease Control and Prevention have warned.

The CDC, a US federal agency, has previously warned that climate change could affect human health in many ways including increasing the number of “disease carriers such as mosquitoes and ticks”.

In a paper published in the Journal of Medical Entomology, it revealed maps showing areas where the habitat was suitable for two particular species of mosquito, Aedes aegypti or Aedes albopictus to survive. 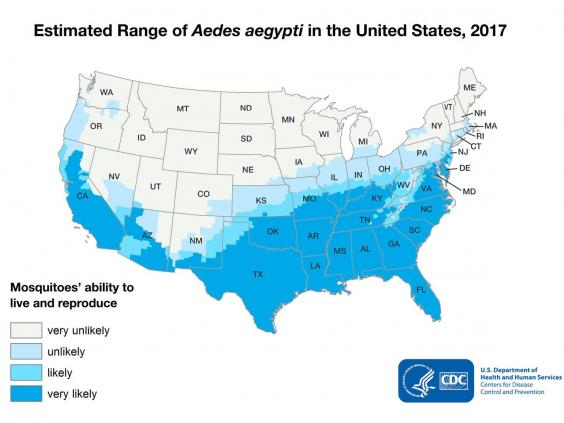 A study found 71 per cent of counties in the 48 contiguous states were suitable for aegypti and 75 per cent could support albopictus.

The paper said the dengue, chikungunya and Zika viruses in particular represented a “growing public health threat in parts of the United States where they are established”.

“We anticipate that Aedes aegypti and albopictus will be found more commonly in counties classified as suitable,” it said.

“Counties predicted suitable with 90 per cent sensitivity should therefore be a top priority for expanded mosquito surveillance efforts while still keeping in mind that Aedes aegypti and albopictus may be introduced, via accidental transport of eggs or immatures, and potentially proliferate during the warmest part of the year.”

Dr Rebecca Eisen, a research biologist with the CDC, said the maps showed the CDC’s “best estimate” of the insects potential range.

“In other words, these maps show areas where CDC predicts Aedes aegypti and albopictus mosquitoes could survive and reproduce if introduced to an area during the months when mosquitoes are locally active,” she said.

However the experts stressed the maps did not show where mosquitos were currently or the place where there was a risk of virus transmission.

Temperature was a key factor.

If there was just one day in winter when the temperature exceeded 10 degrees Celsius (50F), the chances that the area would be suitable for mosquitoes increased.

Consistently cold temperatures, however, reduced the chances that the insects’ eggs would survive the winter, particularly for aegypti, Dr Eisen said.

Rainfall had a significant influence on albopictus as it relies more on water courses filled by rainwater to lay its eggs than aegypti.

Dr Eisen said the maps would help monitor for signs the mosquitoes.

“Surveillance efforts can be focused in counties where Aedes aegypti and albopictus could survive and reproduce if introduced to an area during the months when mosquitoes are locally active or at least survive during summer months if introduced,” Dr Eisen said.

“Additionally, the maps can help healthcare providers and the public understand where these types of mosquitoes could be found so that they can take steps to protect against mosquito bites and possible infection.”

The CDC has produced advice on how to avoid being bitten by mosquitoes and potentially catching one of the diseases they spread.

Their suggestions include wearing long-sleeved shirts and trousers, staying in places with air conditioning or that use window and door screens, using insect repellents approved by the Environmental Protection Agency, treating clothing with an insecticide, permethrin.