By: Danielle A Martin, damartin@visaliatimesdelta.com

A bedbug infestation put Kaweah Delta Medical Center officials on alert, forcing them to call an exterminator into the emergency department.

“Last Wednesday, a patient brought bedbugs into the emergency department,” said Laura Florez-McCusker, a Kaweah Delta spokesperson. “We immediately put established control measures in place, which we regularly use for all types of infection prevention.”

To prevent the spread of infestation, Kaweah Delta staff and a pest control company treated the emergency rooms and surrounding areas. Patients were transferred between rooms while infested rooms were treated.

“Our team’s control measures included caring for the patient and thoroughly cleaning rooms known to have bedbugs,” Florez-McCusker said. “Additionally, we examined every room in the ED and brought in a pest control company to treat rooms where bugs might have been present. This successfully prevented their spread to other patient environments throughout Kaweah Delta.”

“According to the Centers for Disease Control and Prevention, bedbugs are not known to spread disease, but can be an annoyance because their presence may cause itching and loss of sleep,” Florez-McCusker said.

People can have various reactions to bedbugs, according to the CDC website. Some will get a small bite mark while others may suffer an allergic reaction.

A hotspot for bedbugs

According to Rentokil.com, an international pest control service, because hospital emergency departments have a high turnover rate, the emergency rooms and exam rooms are at a higher risk for bedbug infestations.

“[Hospitals] are dealing with all kinds of people and they can’t turn anyone away,” Sotelo said. “Can a really nice hospital get them, absolutely. It would be ludicrous to say no.”

Kaweah Delta’s emergency department sees, on average, 90,000 patients a year, hospital officials said. This time of year is considered their busiest because of the flu.

“Any hitchhiking bedbugs have an opportunity to crawl off a person, their clothing, or their personal items in these areas,” according to Rentokil. “Additionally, since these rooms have a high rate of patient turnover, they may be a higher risk for introduction because they see a higher volume of patients than standard patient rooms.”

Bedbugs often go unnoticed by humans because of their body. Bedbugs have a small, wingless, flat body which makes it easy for them to hide in tight, out of sight places, pest control specialists said.

If a host is nearby, the bugs will come out when they are hungry for blood.

“To avoid detection, the reddish-brown insects typically wait until the middle of the night before beginning their quest for a blood meal and moving toward a host,” according to Rentokil.com. “When they bite, they inject their victim with a mild anesthetic to help them go unnoticed while they feed.” 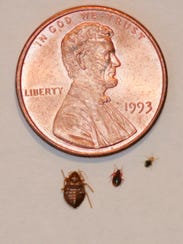 Bedbugs can be of varying size determined by their age and blood consumed. (Photo: Justin Williams)

There are many ways to exterminate bedbugs but some are more effective than others Sotelo said.

Services include tenting the facility, extreme heat treatment, steaming, freezing and spraying of pesticides. The goal is to kill the adult bugs and their eggs.

The key to getting rid of the pest is maintaining pest control services, in case eggs weren’t treated.

“We get rid of them but you can’t just go through once and spray and never see them again,” Sotelo said. “It takes two or three services to get rid of them.”