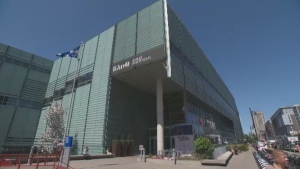 Much of the Grande Bibliotheque remains open but some portions have been forced to close due to a bedbug infestation.

Anyone checking out a book from Montreal’s Grande Bibliotheque should be careful that they’re not also bringing home bedbugs.

Several sections of the city’s biggest library have been closed off as officials try to get a handle on the infestation. Upholstered chairs have been swapped out for plastic seats, and exterminators have been dispatched.

This is not the library’s first bedbug problem. In the past 13 years, there have been multiple episodes of bedbugs. In most cases, it’s been an isolated issue that’s been quick and easy to treat.

This time the tiny, brownish critters – which grow to be about the size of an apple seed — appear to have spread throughout the facility.

An estimated 7,000 people visit the Grande Bibliotheque every day. It’s unclear what may have prompted the problem, but library officials say it’s difficult to control what visitors may bring into the facility.

Other cities have experienced similar infestations. In 2016, 14 library branches in southwestern Ontario were temporarily closed after bedbugs were discovered at a library near Windsor. In that case, patrons were asked not to return borrowed items until the problem was under control.

One-third of Vancouver’s library branches were briefly closed in 2011 after bedbugs were found inside books in New Westminster Public Library’s fiction section.

Bedbugs have been known to spread in other public spaces, including buses, movie theatres and hospitals. As juveniles, bedbugs are translucent but eventually turn a brownish-red after they feed. Females can lay up to five eggs per day.

With files from CTV Montreal