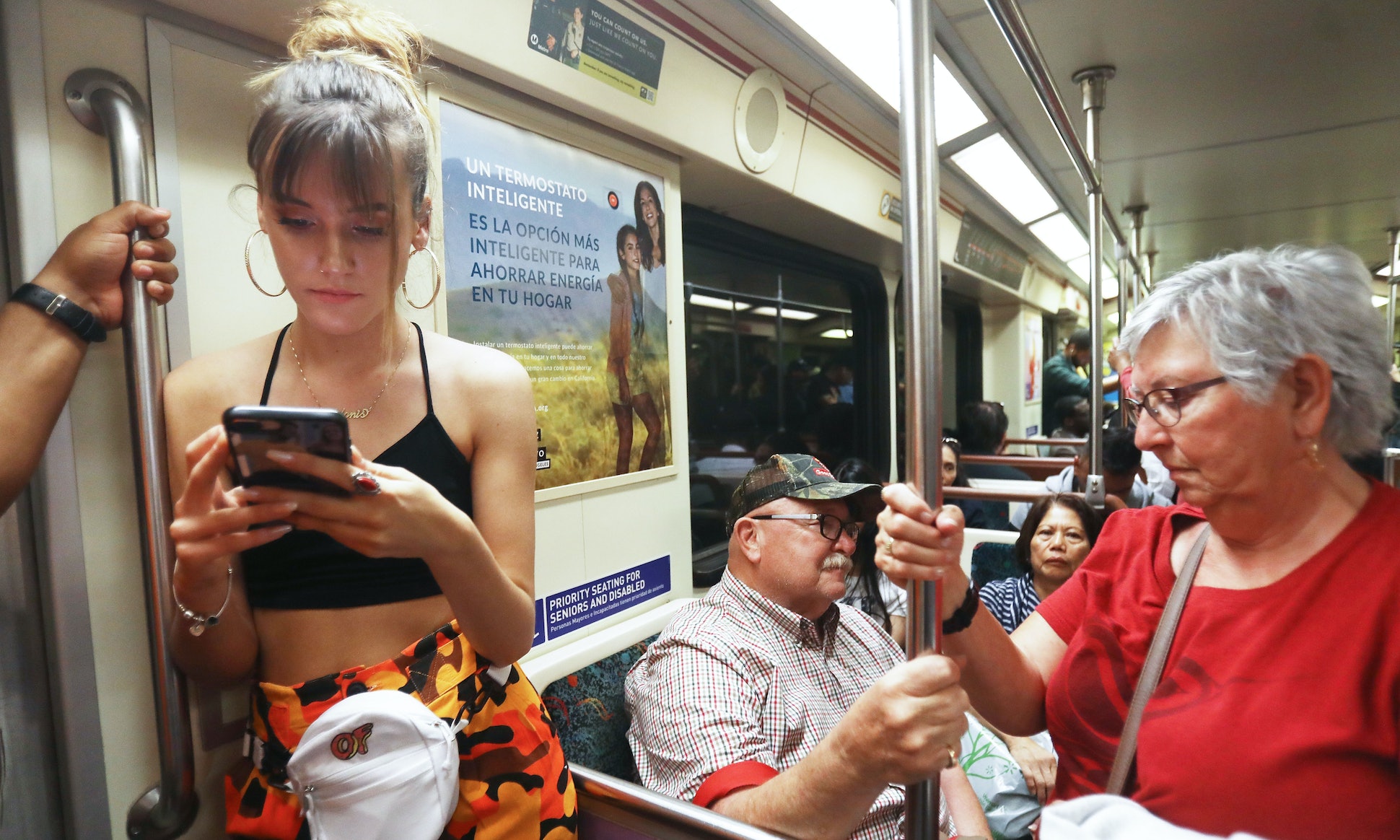 It’s no secret that public transportation is an ideal way to combat gridlock and reduce greenhouse gas emissions from cars. However, if you sit down on the bus or subway on the regular, the gross things on public transportation seats might make you vow to never put your butt on a seat again. This is especially true if you live in Los Angeles or Chicago where metro and el trains sport seats made of fabric, which are more difficult to keep clean.

If you’d rather live in denial, I totally support that, and you should stop reading right now because the Los Angeles Times reported that these seats are home to bed bugs, lice, urine, food, and dangerous bacteria. Despite being cleaned daily, and dry cleaned often, with more than a million trips a day, fabric seats are almost impossible to keep germ free.

In fact, one regular Los Angeles Metro rider told the Times that he hasn’t sat down on the train since a bed bug crawled from a seat onto his lap. “Sometimes you’re tired, or you don’t feel good, and you just want to sit down,” perfume designer and visual artist Chris Rusak said. “But you know what? It isn’t worth it.”

He’s right. If standing on the train can reduce your chances of bringing home bed bugs, do it. After all, 20 minutes of standing is a small price to pay to avoid months of anxiety and expensive pest-control treatments because a bed bug hitched a ride on your belt loop.

Another metro rider told the Times that she got lice after her hair long hair touched a seat. The story also noted that one rider reported witnessing a Metro employee place a paper towel on a seat before sitting down. It’s kind of like when the employees of a restaurant won’t eat the food. Obviously they know something you don’t, and it’s probably best to follow their lead.

Throwback psychedelic-looking fabric-covered seats are designed to disguise dirt and stains, which is why they look like the carpet used in Las Vegas casinos. And while fabric seats are certainly the grossest, germs and pests can cling to plastic and vinyl seats too.

A study from Travelmath found that the New York City Subways system is home to more mold and dangerous bacteria, which can cause skin infections and pneumonia, than any other city in the U.S. This makes sense because New Yorkers take public transport more often than residents of other cities. And more people equals more germs.

In the study of several cities, New York was the most bacteria ridden, San Francisco came in second, Chicago third, and Washington, D.C. fourth. (If you’ve ever ridden the metro in D.C. then you know it’s the unicorn of public transportation and has strict rules about what you can bring on board, which might account for its low levels of bacteria.)

In another study, a global team of scientists launched an initiative to get a snapshot of the bacterial ecosystem aboard public transportation, The Sydney Morning Herald reported. While they concluded that most of the bacteria is harmless, that doesn’t mean it isn’t gross. The study found that 20 percent of bacteria present in the New York City Subway system came from genitals — the result of improper hand washing and farting. Seriously.

Other bacteria came from the human gastrointestinal tract and human skin. Because subway trains tend to be jerky, it’s pretty difficult to stand the entire time without holding onto the handrail, which is why proper hand washing is so important. What’s more, you should also clean your phone after riding public transportation because it’s pretty likely that you touched something gross on the train and then started scrolling through social media thus transferring those germs to your digital bestie.

Other germ ridden forms of transport include buses, taxis, and airplanes. Specifically airplane tray tables, which probably aren’t wiped down after every flight. If you’re super grossed out, Travelmath said that common sense is the best defense against germs on public transportation.

“Avoid touching surfaces if you can help it, keep your hands away from your face and out of your pockets to avoid spreading germs, and wash your hands as soon as you arrive at your destination.” Additionally, it’s a good idea to carry alcohol wipes with you when flying so you can wipe down the tray table and the touch screen before choosing your in-flight movie. Because, the germs on public transportation are sick AF, and not in a good way.