Silent killer infected as many as 300,000 in the United States.

A deadly disease spread by kissing bugs is spreading across the United States.

According to a Forbes report, the critters spread Chagas disease, which is caused by the parasite Trypanosoma cruzi. Kissing bugs carry the parasite, and eventually, any potential infection transmitted to human hosts can cause heart damage. The insects get their name because of a tendency to bite near the lips or eyes with a so-called “kiss.” The bugs then defecate near the wound they left, contributing to the spread of the parasite.

Previously, the disease was more prevalent in Latin and South America, but more recently it has spread to the United States. So far at least 300,000 residents of at least 28 states have been infected with Chagas disease, according to a Fox News report. Worldwide, as many as 8 million people have contracted the potentially deadly infection. Roughly 20 to 30 percent of people who get bitten by the bugs become infected with the disease, which can lead to heart failure, stroke, irregular heartbeat, or even sudden death. The condition is often called the silent killer because it wrecks havoc silently in the body until it’s too late.

Treatment includes anti-parasitic medications like benznidazole or nifurtimox as soon as possible after contracting the disease. Unfortunately, it can take as long as a decade before infected individuals experience symptoms, and by that point, it can often be too late for effective treatment. Swelling near the original bite could be the only initial symptom. People who suspect they’ve been bitten by one of these insects should contact their doctors soon after the bite to determine the best course of treatment. 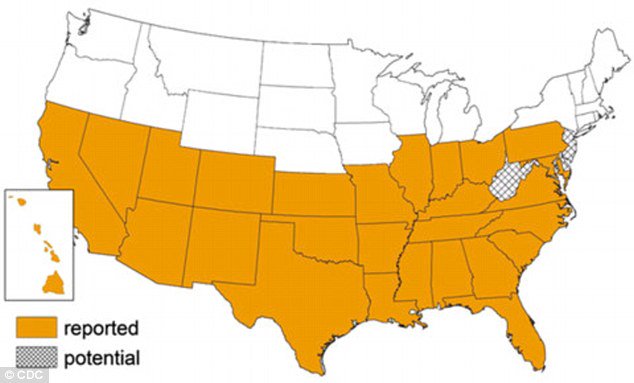 Dangerous parasitic disease caused by ‘kissing bugs’ has sickened 300,000 Americans – and doctors warn it is spreading across the U.S.http://ow.ly/rWG630lxVRH

Currently, the kissing bug is often found in Texas, Florida, and Southern California — but it is spreading to other states as well. In addition to catching the disease from a bite, the disease can also be spread through blood transfusions.

While researchers work to develop a vaccine to protect against the disease, the situation continues spreading — not enough people comprehending the devastating effects that the bugs can have on victims if left untreated. In a bit of additional bad news, the financial fallout from the disease may cost as much as $7.19 billion per year, which means that efforts to control both the kissing bugs and the disease must increase.

In an online statement, Caryn Bern, professor of epidemiology and biostatistics at the University of California in San Francisco, said, “Early detection of Chagas disease is critical, allowing prompt initiation of therapy when the evidence for a cure is strong.”

So far, researchers have identified 11 species of kissing bugs in the United States. Nearly 50 percent of the insects are infected with the parasite that causes Chagas disease.