Cutting out pesticides by eating only organic food could slash your cancer risk by up to 86 percent, a new study claims.

The biggest impact was seen on non-Hodgkin’s lymphoma risk, which plummeted among those who shunned chemical-sprayed food, according to the survey of nearly 70,000 French adults.

Overall, organic eaters were 25 percent less likely to develop any cancer, and their risks of skin and breast cancers dropped by a third.

The finding comes amid a flurry of interest in the cancer risks of pesticides, spurred by this summer’s Monsanto trial, when a jury awarded a cancer-suffering groundsman $250 million after concluding that Roundup weedkiller caused his cancer. 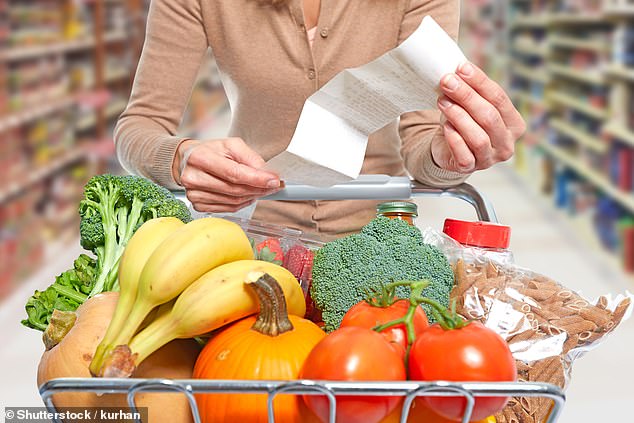 The survey of nearly 70,000 French adults comes amid a flurry of interest in the cancer risks of pesticides, spurred by this summer’s Monsanto trial, which found Roundup gave a man cancer

The health benefit was far greater for obese people, they found.

However, the diet had no significant effect on bowel cancer – which is soaring in numbers globally – or prostate cancer.

‘Our results indicate that higher organic food consumption is associated with a reduction in the risk of overall cancer,’ lead author Dr Julia Baudry of the Centre of Research in Epidemiology and Statistics Sorbonne, Paris said.

‘We observed reduced risks for specific cancer sites – postmenopausal breast cancer, non-Hodgkin’s lymphoma, and all lymphomas – among individuals with a higher frequency of organic food consumption.

‘Although our findings need to be confirmed, promoting organic food consumption in the general population could be a promising preventive strategy against cancer.’

Organic food standards do not allow the use of synthetic fertilizers, pesticides, and genetically modified organisms and restrict the use of veterinary medications.

While organic food is nothing new, more and more studies are showing how pivotal it could be for your health. A recent review found that, while pesticide manufacturers dispute cancer links, the amount of evidence showing the links to be true is overwhelming.

Dr Baudry explained among the environmental risk factors for cancer there was growing evidence of a link between exposure to pesticides notably in farm workers and cancer development.

She added: ‘While dose responses of such molecules or possible cocktail effects are not well known, an increase in toxic effects has been suggested even at low concentrations of pesticide mixtures.

‘Because of their lower exposure to pesticide residues, it can be hypothesised that high organic food consumers may have a lower risk of developing cancer.

But little research has been done so her team scored 68,946 volunteers who had answered a health and lifestyle questionnaire for the French population study, NutriNet-Santé, on how much organic food they ate.

The researchers then followed the participants’ health from 2009 to 2016 asking them to report if and when they got cancer.

The cohort, who were 78 percent female and an average age of 44 were broken up into four groups according their organic diet food scores.

Factoring in known cancer risks, the proportion of participants in the top quartile for eating organic food who got certain cancers was a fraction compared to those in the bottom quartile.

Dr Baudry said: ‘The findings, which were weighted for known cancer risk including lifestyle and family history, also revealed that organic diets benefited obese people the most.

‘Regarding the latter association, previous occupational data have indicated a potential interaction between obesity and pesticide use on cancer risk.

‘It can be hypothesized that obese individuals with metabolic disorders may be more sensitive to potential chemical disruptors, such as pesticides.

‘Our findings revealed a negative association between high organic food scores and postmenopausal breast cancer, non-Hodgkin’s lymphoma, and all lymphomas.

‘No associations were observed with other cancer sites.’

Participants got a score from 0-32 on how often they ate organic food from common food categories such as cereals, fruit and veg, dairy and meat products and more.

Among the participants, 1,340 first incident cancer cases were identified during the study’s follow-up period.

The most common was 459 breast cancers, followed by 180 prostate cancers, 135 skin cancers, 99 colorectal cancers, 47 non-Hodgkin lymphomas, and 15 other lymphomas.

High organic food scores were inversely associated with the overall risk of cancer being 25 percent less for those of the top quartile compared to the bottom.

But Dr Baudry warned of the limitations of the study saying the findings needed to be confirmed and with only 90 percent of cancers were accurately reported by participants.

She added the organic food effect on cancer was not seen when the cohort was further broken down to compare people with similar lifestyles such as how much they smoked and education levels.

She said: ‘When considering different subgroups, the results herein were no longer statistically significant in younger adults, men, participants with only a high school diploma and with no family history of cancer, never smokers and current smokers, and participants with a high overall dietary quality, while the strongest association was observed among obese individuals.’

Limitation were it was based on volunteers who were likely particularly health-conscious individuals, participants were more ‘female, well educated, and exhibit healthier behaviors compared with the French general population.

‘These factors may may have led to a lower cancer incidence herein than the national estimates, as well as higher levels of organic food consumption in our sample.’

The paper was published in JAMA Internal Medicine.