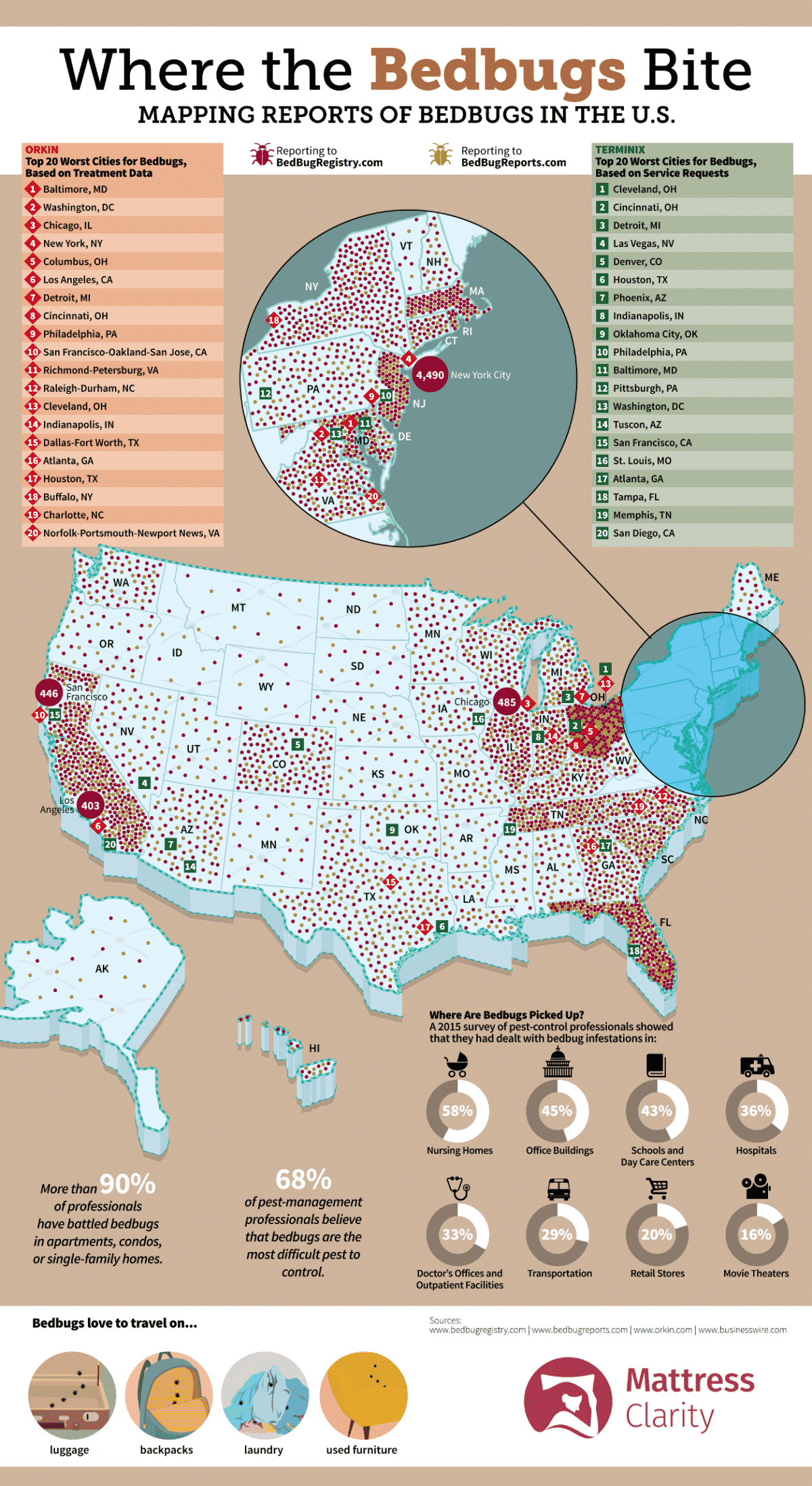 Like this infographic? Consider sharing it with this link or embed on your own site with the embed code below!

It seems like only a few years ago that the phrase “don’t let the bedbugs bite” was a cute little thing said before sleep, devoid of any real threat. Because of a few pesticide-resistant strains of the critters, though, there’s been an explosive epidemic of bedbug infestations across the U.S. We’ve created a U.S. bedbug infestation map to show how many reports have been submitted to The Bedbug Registry and BedbugReports.com by state as well as the hot spots for popular pest-control companies Orkin and Terminix. The results of our bedbug report are pretty gross.

What Are The Worst Cities For Bedbugs?

If you analyze our bedbug outbreak map, there’s not as much consensus as one would think. That said, the top bedbug cities tend to be repeat offenders on the East Coast such as New York City, Baltimore, Chicago, and Cleveland. New York City alone has more than 4,000 reports in the registry.

Which State Has The Most Bedbugs?

The worst states for bedbugs are consistently New York and California. Florida, Ohio, New Jersey, and Maryland also have crawled up the ranks.

Will Bedbugs Spread To Me?

Look at this data on bedbugs by state, map out the cities that are closest to you, and figure that there is a fair chance that your local metropolis has a few infested hotels. But don’t worry too much; there are many small things you can do to prevent bedbugs from coming home with you.

How Do You Get Bedbugs In The First Place?

It may seem like they show up out of nowhere, but that’s not the case. How do bedbugs spread? They tend to hitch a ride on clothing, luggage, used furniture, and laundry. Hotels, hospitals, office buildings, and nursing homes are their favorite spots. If you look at our bedbug map, you can see that the worst areas tend to have many hotels.

If You Find Yourself Wondering, “Do I Have Bedbugs?,” Here’s What You Can Do:

Joe Auer is the editor of Mattress Clarity. He mainly focuses on mattress reviews and oversees the content across the site. He likes things simple and take a straightforward, objective approach to his reviews. Joe has personally tested nearly 100 mattresses and always recommends people do their research before buying a new bed. He has been testing mattresses for over 4 years now, so he knows a thing or two when it comes to mattress selection. He has been cited as an authority in the industry by a number of large publications. When he isn’t testing sleep products, he enjoys working out, reading both fiction and non-fiction, and playing classical piano. He enjoys traveling as well, and not just to test out hotel mattresses! Joe has an undergraduate degree from Wake Forest University and an MBA from Columbia University.