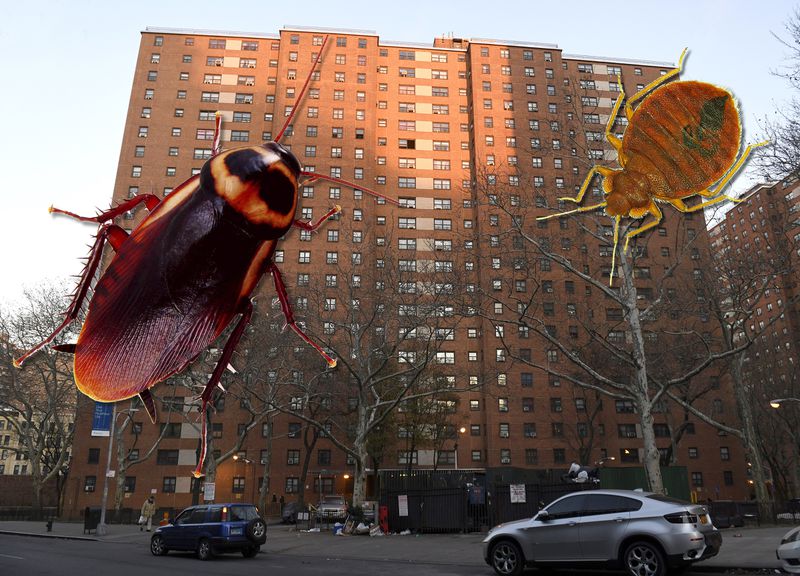 The Grant Houses in Harlem had the most overall creepy crawler complaints with 981 — 877 of which were for roaches. (New York Daily News Illustration)

The Grant Houses in Harlem had the most overall creepy complaints over the first nine months of 2019 with 1,000 — 894 of which were for roaches.

The Pomonok Houses in Queens had the highest number of bedbug work orders during that period at 156. The Wagner Houses and Grant Houses didn’t trail far behind with 129 and 106 bedbug jobs for each complex respectively.

The statistics on roach and bedbug complaints between Jan. and Sept. 2019 came through a Freedom of Information request filed with NYCHA by the Legal Aid Society, which shared the data with the Daily News. The agency also shared data on insect complaints from 2018.

Tyrone Bell, tenant association president at the St. Nicholas Houses in Harlem, said people haven’t complained to him about bedbugs, but he wasn’t surprised that his complex had the 5th highest number of gripes, given other issues there like rats, mold and faulty elevators.

“There are plenty of problems,” he said. “This development needs a lot of work.”

Judith Goldiner, Legal Aid’s attorney-in-charge of civil law reform, described the number of infestation work orders as “troubling,” and cited it as just another reason she and others are calling on Albany to put $2 billion in additional funding toward NYCHA.

The bug numbers were not all bad news though, according to Goldiner.

On average it took NYCHA about nine days to fully address the complaints — a detail she views as a good sign.

“This is a clear byproduct of more staff on the ground and resources,” she explained. “With the legislature now in session, we again call for increased funding for public housing authorities to address these problems and others facing tenants.”

A NYCHA spokeswoman pointed to a downward trend over the last two years when it comes to critter complaints, noting that the authority has hired 20 new exterminators over the last year.

“Our trends show an improvement in closed bedbug and roach work orders,” said NYCHA spokeswoman Rochel Goldblatt. She noted that the longer times for roach remediation stem from NYCHA’s new Integrated Pest Management system, which places an emphasis on more than band-aid solutions.

Instead of spraying for roaches, exterminators are looking for holes, caulking and vacuuming,” she said. “The bedbugs weren’t affected by the above trend because we treat them like an emergency and try to schedule them as soon as possible. This was updated in our system in July 2019, making rats and bedbugs a higher priority.”

State Sen. Zellnor Myrie (D- Brooklyn) agreed, but only so much. He said NYCHA deserves blame for past fiscal mismanagement, but added that it doesn’t mean government should continue to underfund it.

He pointed out that $2 billion is just a fraction of the more than $30 billion NYCHA now needs.

“It would not meet the entire deficit,” he said.