The coronavirus hasn’t stopped people in Florida from enjoying the outdoors.

A video recorded by a resident in Titusville, about 55 miles east of Orlando, shows dozens of cars parked side-by-side at Parrish Park on Easter, despite state orders for people to social distance in public.

“Over the past couple weekends, it’s been crazy,” Dan Rojas, who captured the footage, told WKMG this week. “When you’re in here, there’s two, three hundred people here in this small space.”

“I think that the park should be closed,” he added.

Some Titusville residents who were at Parrish Park on the Indian River Easter Sunday express concerns about the large crowds. In response to #coronavirus, @BrevardCo_FL closed public parks at beaches last month. Parks on the lagon remain open. More on @news6wkmg at 4:30. 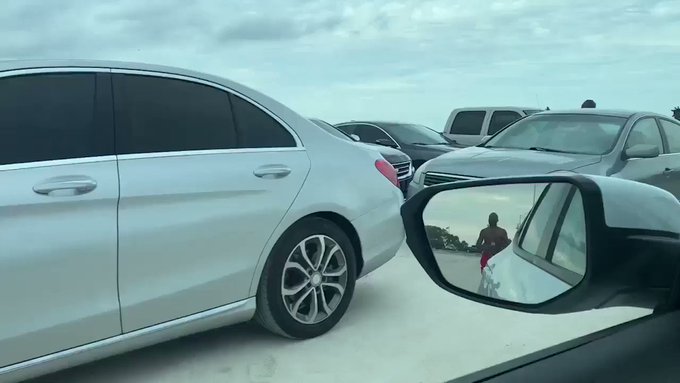 Florida, like many other states across the U.S., has advised residents to stay at home and venture outside only for trips to essential businesses like grocery stores and pharmacies.

Yet it has been up to the counties to decide whether the Sunshine State’s popular beaches and parks will remain open for visitors.

Beaches in Brevard County – where Titusville is located — have been kept open, but with restrictions such as no sunbathing or gatherings of more than 10 people.

Every day and in every community, the coronavirus pandemic is bringing out the best in Americans. Take a look at some inspiring images of Americans pulling together in a time of crisis.

Despite all playgrounds being closed, “parks and trails remain open”, according to the county.

“We want people to be able to go and hang outdoors and not be stuck in the house all day, but the problem is, we also are pushing the CDC recommendations of 6 feet social distancing, of avoiding mass gatherings,” he told WKMG.

As of Friday, the state of Florida has 23,340 confirmed coronavirus cases, with 668 deaths, statistics show. Johns Hopkins University says 192 of those cases and six of those deaths have been in Brevard County.