A Blade review of hundreds of pages of public records found that 35 individuals suffering from mental health and addiction disorders were removed from six adult care homes in Toledo as a result of concerns about poor living conditions and possible criminal behavior.

The documents, obtained by The Blade through Ohio’s public records law, provide insight into how unscheduled inspections of the homes in Toledo in December and January raised questions about residents’ access to basic care and fundamental necessities. State and local social service officials performed the unannounced inspections after they received complaints about violence, unsanitary living conditions, and even individuals in one home being sex trafficked.

State reports show inspectors found some residents weren’t being fed three meals a day. Others claimed they were assaulted by group home employees. Bed bugs infested every bedroom of one home; while in a second location investigators found broken glass, a chicken carcass uncovered on a plate in the refrigerator, a room that smelled like urine, and a mattress flanked by used condoms in the backyard.

Now authorities are trying to determine next steps, while operators of the homes in question are pushing back against what they say are unfair accusations about conditions and safety, and the improper decision to displace residents from homes where, in some cases, they had lived for more than a decade. State Department of Health officials have largely declined to discuss the case, while the Mental Health and Recovery Services Board of Lucas County has defended the removals, arguing conditions found in the homes were dangerous.

Some elected leaders and mental health service advocates and experts, meanwhile, are calling for better oversight of adult care homes, which total 112 in Lucas County.

Terry Russell is director of Ohio Adult Care Facilities Association, a Columbus-based nonprofit that works with group home operators to improve care and services for residents. He believes that operators have for years been left alone to fend off the many problems that can arise when caring for mentally ill individuals. State officials must do more to ensure such homes are clean and safe, and operators are supported, he said.

“Sometimes we treat the mentally ill like commodities,” Mr. Russell said in response to the allegations surfacing in Toledo. “The mental health system has just ignored them.”

The Ohio Department of Mental Health and Addiction Services oversees the state’s adult care home program. The program aims to provide community-based housing opportunities to adults who suffer from mental and developmental disabilities, addiction, and other issues.

The homes, usually found among common neighborhoods, are operated by private citizens or enterprises, working under state licenses. Operators must renew their license every two years, according to state law. Home inspections are done annually, each time a licensee seeks renewal, and whenever a complaint, whether anonymous or by caseworkers and guardians, is filed with the state. 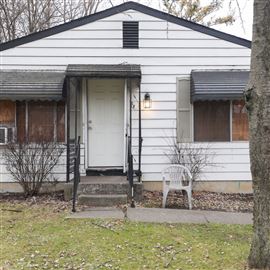 It was complaints about such requirements that led county officials along with the Ohio Department of Mental Health and Addiction Services, beginning in December, to conduct unannounced visits to eight homes in Lucas County. Eventually residents from six of those homes, all in Toledo, were removed.

Scott Sylak, the director of the Lucas County mental health board, said Ohio Revised Code gives his department authority to take action when residents are in “imminent danger.”

“I’m concerned for the health and safety of our clients which fall under our governing,” he said. “But, I’m also concerned about the providers and the operators and helping them. … We need them. We need to do a better job of supporting them and they need to do a better job of following through on the licensing requirements and addressing the issues that they know they need to address.”

Lori Criss, director of the Ohio Department of Mental Health and Addiction Services, declined to discuss specifics of the individual cases.

The state conducted an unannounced  visit on Jan. 17 to a group home located at 68 San Rafael Ave. in South Toledo after receiving a complaint that two women living in the four-person home were being sex trafficked. State and local mental health officials inspected the home alongside Toledo police and Lucas County sheriff’s deputies.

Inspectors on site talked to residents — unnamed in inspection reports — who said two female residents would often have “strange men” in the home and would often use drugs. Those same residents  reported their concerns to owner Clara Brank, who operates Clara Mae’s Adult Family Home, LLC.

“One resident reported that she is afraid due to the strange men in the home and one of the other residents threatened her for telling the owner what was happening,” according to a state investigation summary. “The facility owner reported that she was aware that two of the residents were having men come into the group home and she contacted case managers and gave the residents [30-day vacate notices], but did not increase supervision in the homes to ensure the safety and well-being of all…”

Sgt. Paul Davis, a spokesman for the police department, said a detective at the scene determined no one at the home was being sex trafficked, however, at least one woman was “having sex in exchange for drugs and money.”

Officials found and documented other concerns during their visit, too.

Records from the inspection accuse Ms. Brank of not providing three meals a day to residents as required by the state. Inspectors found a chicken carcass uncovered on a plate in the refrigerator, and a room in the house smelled like urine. Broken glass was observed in some areas of the house and a mattress flanked by used condoms was observed in the backyard. Residents also reported Ms. Brank only came by twice a day to bring food and pass out medications, according to state documents.

Following the inspection at 68 San Rafael, Mr. Sylak and state officials decided as a precaution to relocate residents from there, and from Ms. Brank’s other group home, located at 72 San Rafael Ave.

Ms. Brank, when reached by The Blade last week, said she “has enough supervision” at the home on 68 San Rafael Ave., but declined further comment.

“I’d rather not say anything right now,” she said.

Previously, Ms. Brank told The Blade the problems at the home started after she agreed to house an individual who was released from jail on the basis that state and local officials would help her monitor the resident. After breaking house rules, the resident received a 30-day vacate notice and was supposed to be gone by Feb. 2, Ms. Brank said, but then on Jan. 17, authorities relocated residents from the two San Rafael properties.

Mr. Sylak said he doesn’t have the authority to “close down” the homes and added that the state will go through a process to determine the status of affected operators’ licenses.

A resident there accused a staff member of assault after a dinnertime argument. According to state documents, the resident left the dining room area after the argument and was followed by the employee, who barged through a door and tackled the resident onto a bed. The resident cut his head on a nearby window, an injury that required staples, according to the report.

Attempts to reach Ms. Price were not successful.

During an unannounced complaint-based visit on Dec. 20, 2019, inspectors found live bed bugs in every bedroom, facility operators only providing one meal to residents each day, and expired food made available to residents. The facility’s license had expired 10 months earlier on Feb 2, 2019, and the state never received a renewal application, records show.

Ms. Price also owns homes at 5565 and 5238 Clover Lane. Residents from those houses were relocated because of concerns about supervision. Live bed bugs and “bed bug excrement,” were also found on mattresses inside the homes, according to reports.

Tom Johnson, who lives next door to the home at 5238 Clover, told The Blade he and other neighbors have had to call the city about trash in the backyard, which caused rats to appear.

Mr. Johnson said he worries residents are often without food and he will offer them vegetables from his garden.

“Those people don’t deserve to be treated like that,” he said.

At 2262 Collingwood Blvd., complaint-based visits were conducted on Jan. 3 and Jan. 7 after a resident alleged the operator’s son “beat him” and told him he would be thrown out of the facility.

Durell McGhee runs the 14-person adult care home under his Hadley Homes LLC. He said he didn’t learn about that complaint until he received a letter from the state on Feb. 10. He told The Blade he immediately fired his son once he got the letter — but that was 33 days after the incident. Mr. McGhee said he was in the dark during that time, wondering why residents were removed from the home.

“When I found out what the problem was I fired him immediately,” Mr. McGhee said. “They never told us a reason. If I would have known, I would have fired him right then.”

“What they’re doing is wrong,” Mr. McGhee said. “The county is totally out of order. There were people there 15 years, crying, asking them not to take them.”

Mr. Sylak defended the decision to remove residents in order to keep them safe. He also said the residents all moved willingly and voluntarily.

“We’re always going to protect people when we believe their health or safety is in imminent danger,” he said.

Attempts by The Blade to contact adult care home residents were unsuccessful.

As of Monday, no criminal charges had been filed in relation to the adult care home complaints and inspections.

Since the removals, the operators of the affected homes have been given until Thursday to provide the state a written plan that identifies how owners “will correct, or have corrected each finding,” records show.

Eric Wandersleben, a spokesman for the Ohio mental health department, said the state will then check compliance with the corrective plans through follow-up site visits.

“If the providers are still out of compliance, the department has the authority to take further action,” he said.

Toledo city councilmen Larry Sykes and Yvonne Harper put the blame more pointedly at the state level. Both said state officials need to be doing more to regulate such homes, and ensure those who live in them receive quality care.

“The state needs to be held accountable,” Mr. Sykes said. “They need to reassess their policies. There’s a lot of questions that need to be asked.”

The Lucas County mental health board will hold a regularly scheduled monthly meeting Tuesday at 4 p.m. at 701 Adams St.