Contributed by Sharon Van Zweiten — Body aches. Fever. Vomiting. Swelling, around the site of a possible bug bite. You could just have the flu. But if you’ve been bitten by the kissing bug, an assassin bug or a bedbug, you could be at risk for a deadly disease: Chagas.

Caused by the parasite Trypanosoma cruzi, Chagas is transmitted by blood-sucking bugs—and according to a recent study—by  the everyday bed bug. When Chagas-carrying bedbugs emerge in numbers, hundreds of millions of people worldwide will become more vulnerable to the deadly disease.

Factors Leading to Chagas Deaths
Left undetected and/or untreated, Chagas may thrive even during apparent periods of remission. Victims may not show any signs of the disease for as long as 20 years. But, 20-30 percent of Chagas victims will develop chronic symptoms that can result in irreversible and fatal damage.
·      Abnormal heart rhythms can lead to sudden death.
·      Permanent and irreversible heart damage caused by Chagas over several years can cause heart failure.
·      Chagas-related digestive issues including constipation, abdominal pain and other disorders can ultimately affect the heart.
·      Damage to the esophagus that can result in swallowing difficulties or choking.

Chagas disease kills more people in Latin America than any other infectious disease, including malaria, tuberculosis and HIV. Now, doctors say it’s come home to the United States. A research term at Baylor says the diagnosis rate is low because of low awareness among US health professionals. 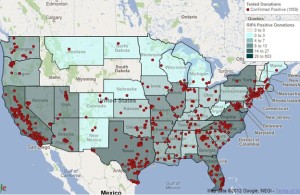 According the CDC, about 300,000 people in the US with Chagas, were infected before they came to the US from Latin America. While only 23 cases have been reported in people who haven’t traveled outside the US since 1955, the epidemic of infections and the increase of travel plus the incubation period forecasts a possible spike in the number of cases here.

Prevention is the best defense.