The Center for Disease Control and Protection is warning residents in the United States about a deadly bug that has made its way to 12 different states including Indiana. An insect know as a Triatominae, has been known to bite people in the face and infecting them with disease called Chagas. This disease has been dubbed as the deadly “Kissing Bug.”

These insects are not something to mess around with. Some of the symptoms of Chagas are fever, fatigue, swelling and a rash but it can be more serious causing strokes or even heart failure. Your pets aren’t even safe from the triatomine insects, as Chagas can actually give your pets heart disease. 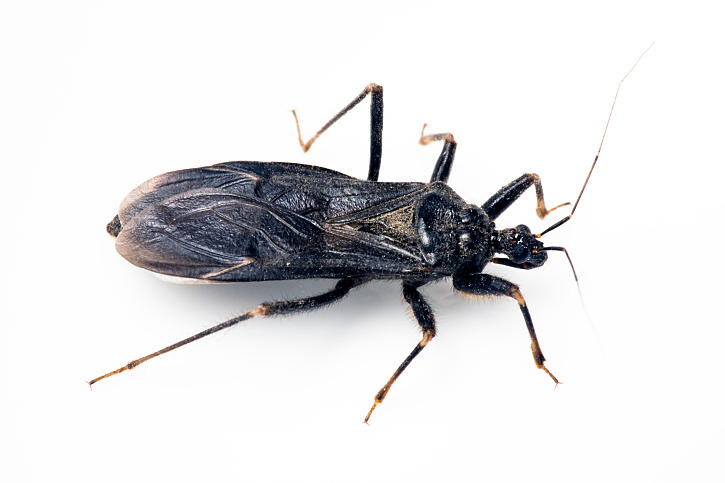 I found what looked like a Triatominae in my house the other day. I can’t say for sure if it was, but it certainly looked like one. These bugs, when found inside your home, are typically located near the places your pets sleep, in areas of rodent infestation, and in/around beds and bedrooms (especially under or near mattresses or night stands.

The one I found was on my night stand. I didn’t take my chances, so I squished it…which apparently you aren’t supposed to do if you find one. According to the CDC:

If you find a bug you suspect is a triatomine, do not touch or squash it. Place a container on top of the bug, slide the bug inside, and fill it with rubbing alcohol or, if not available, freeze the bug in the container. Then, you may take it to your local extension service, health department, or a university laboratory for identification.

Surfaces that have come into contact with the bug should be cleaned with a solution made of 1 part bleach to 9 parts water (or 7 parts ethanol to 3 parts water).

If you want to take precautions to keep the triatomine bug out of  your house, the CDC recommends that you contact a licensed pest control operator before you use any insecticides to kill triatomine bugs. It should also be noted that roach hotels or other “bait” formulations do not work against these bugs. Other precautions to prevent house infestation recommended by the CDC include:

Bad news, New Yorkers — if you like to take long walks or pay visits to your local park, you’ve probably been exposed to glyphosate, the cancer-linked main ingredient of Monsanto’s Roundup herbicide. In response to concerned citizen groups, the New York City government released a report last year detailing pesticide use by its agencies. And now, if you’d like to see whether you’re at risk, Reverend Billy & The Stop Shopping Choir have created a disturbing new map that charts every park and public area known to be treated with the toxic compound. You can view the map here.

The data shows that in 2014 alone, the city applied glyphosate 2,748 times within the city. While the recent numbers are alarming enough all on their own, what’s even worse is the fact that glyphosate use within the city seems to be increasing — the amount sprayed jumped 16% from 2013 to 2014.

Why is NYC drenching its parks in a chemical that World Health Organization classes as a probable carcinogen? Studies have repeatedly linked the herbicide to cancer dating back to the 1980s, and farmers have even filed suit against Monsanto alleging that exposure to glyphosate caused them to develop the disease. The company, naturally, has fought back against this research by suing states that try to regulate the use of the herbicide.

While cities like NYC and San Francisco may have no problem with spraying this controversial chemical all over their streets, other governments are beginning to crack down on glyphosate use. France has banned the sale of the herbicide over the counter, along with the Netherlands, Bermuda, and Sri Lanka. In Switzerland and Germany, major retailers have begun refusing to stock Roundup even in the absence of government regulation. The evidence of Roundup’s toxic effects is strong enough for the leaders of these nations and corporations to pull it from the shelves, and New York City needs to stand up and take note.

Music and song lead the message and movement to help each other.  Radiate positive vibes with the smash-hit song “All Walls Down”.

Enjoy this smash-hit song written by KiltronX and Joe Beaty [Mind Like Water] and produced and recorded by Tony Bongiovi at the famous Power Station Studio.   This song was created to bring awareness of the risk of Chagas disease through bedbugs and kissing bugs (aka “love bugs”).

We are all connected.  If the poor are more exposed to the deadly Chagas disease then we ALL are.  The free roaming love bugs & kissing bugs and undercover bedbugs do not discriminate – nor do they ask for a financial statement before sucking the blood of their victims.

Bedbugs can be found in all states and all cities and love bugs and kissing bugs have spread outward and up through all states bordering the Gulf of Mexico, along the Atlantic coast, the West coast and north.

Dr. Peter Hotez of the National School of Tropical Medicine says “low-income neighborhoods … are at greater risk for infection”.  Because of their predilection for the poor, Hotez calls these infections “the forgotten diseases [Chagas] of forgotten people”.

Chagas disease not only affects humans but also their pets – be it horses, dogs, cats, livestock.  Our pets are among the most innocent and have no protection.

Awareness and preparedness are crucial to saving lives.

(AUSTIN, TX) – Kissing bugs continue to creep across the state and experts say the threat these insects can carry may be worse than expected.

“I am really amazed to read that 64% of them have Trypanosoma cruzi,” said Nancy Moran, a professor of Integrative Biology at University of Texas-Austin.

Trypanosoma cruzi is a parasite that can lead to Chagas disease, a potentially deadly disease that can cause heart failure.

In response to the report that 64 percent of kissing bugs carry the parasite, Moran said, “It suggests that a lot of Texans could be afflicted with Chagas disease possibly without being properly diagnosed.”

In humans, the infection can start with flu-like symptoms–fever, body aches, nausea, vomiting–but the infection can also stay silent for decades. Heart and intestinal complications can surface years after a person is infected, or not at all.

“We’ve tested a few dogs that we may have been suspicious of,” said veterinarian, Dr. Amber Breclaw.

“It is a scary prospect that yes these bugs can bite your animal and cause a disease that leads to heart failure,” Breclaw said.

“experts say the threat these insects can carry may be worse than expected.”

In Texas, the kissing bugs are most commonly found in the southern part of the state. Indigenous to Latin America, the threat kissing bugs pose is fairly new to Texas, but it’s a threat that continues to spread.

In dogs, the infection can be a little more difficult to spot. Symptoms start with a loss of energy and a decrease in appetite and if the infection is not caught early, there is no treatment to save the animal.

Blood tests are the only way to confirm if a person or pet has been infected.

Breclaw and Moran said they don’t want people to panic, but it us important for Texans to be aware that kissing bugs are out there.

The nocturnal insects are most active at night and typically live beneath porches, between rocks, under cement and brush piles.

To best protect yourself and your pets, keep dogs inside at night.

If you think your or your animal has been bit by a kissing bug, it’s important to seek medical attention as soon as possible.

Keeping pests out of your home may come at a big risk to your kids, says a new study.

Strapping a flea collar on the family pet or spraying your kitchen for ants is putting your child at an increased risk of certain cancers, a new study has found.

In the study, which was published in Pediatrics, researchers analyzed the results of 16 different studies of children exposed to indoor pesticides. And they found that exposure to indoor insecticides is associated with a 47% greater risk of childhood leukemia and 43% increased risk of childhood lymphomas.

Researchers do note that only a small number of studies were analyzed, and they emphasize that though the research shows an increase in risk, these diseases are still uncommon — though increasing.

“The incidence of childhood leukemia and lymphoma has increased in recent years, and that prompted us to look at this issue,” lead author, Chensheng Lu, an associate professor of environmental exposure biology at the Harvard T. H. Chan School of Public Health, told The New York Times. “But the risks can be managed as long as parents think, before using pesticides, about better ways to make a house pest-proof or pest-free. That’s a far more important message.”

A deadly pesticide banned for use in the United States likely killed four pets and a possum in recent weeks in Kissimmee, according to the Osceola County Animal Services.

Three cats and the possum were found dead two weeks ago on Locust Berry Drive and a dog died the following weekend in the same neighborhood, Animal Services Director Kim Staton said Monday.

“It’s kind of unusual to have that many deaths,” said Staton “None of them showed external injuries.”

The bodies of the cats and the possum were found within feet of a bowl filled with rice and beans outside an undisclosed home on the street. Tests conducted last week at Michigan State University showed the bowl’s contents had deadly levels of Aldicarb, a pesticide banned for sale in the U.S., said Staton.

“People are not supposed to be able to obtain it at this point,” she said.

The pesticide drew international attention after July 4, 1985, when more than 2,000 people were treated for poisoning after eating watermelons improperly grown with Aldicarb, according to the federal Centers for Disease Control. International bans followed when testing showed it was particularly deadly for children.

Animal Control officers are trying to find the source of the pesticide.

Sold illegally in the U.S. as “Tres Pasitos,” the pesticide is smuggled from Latin American countries where it used to kill roaches, mice and rats. “It’s name means “Three Little Steps” in English, because after eating it, this is all mice can muster before dying,” according to the federal Environmental Protection Agency.

The dead animals will undergo necropsies at the University of Florida’s College of Veterinary Medicine, Staton said.

Residents living on or near Locust Berry Drive have been advised not to allow their pets outside without being on a leash.